Home 9 English 9 Ayayi and Petrusev, the future of the EuroZags

Ayayi and Petrusev, the future of the EuroZags 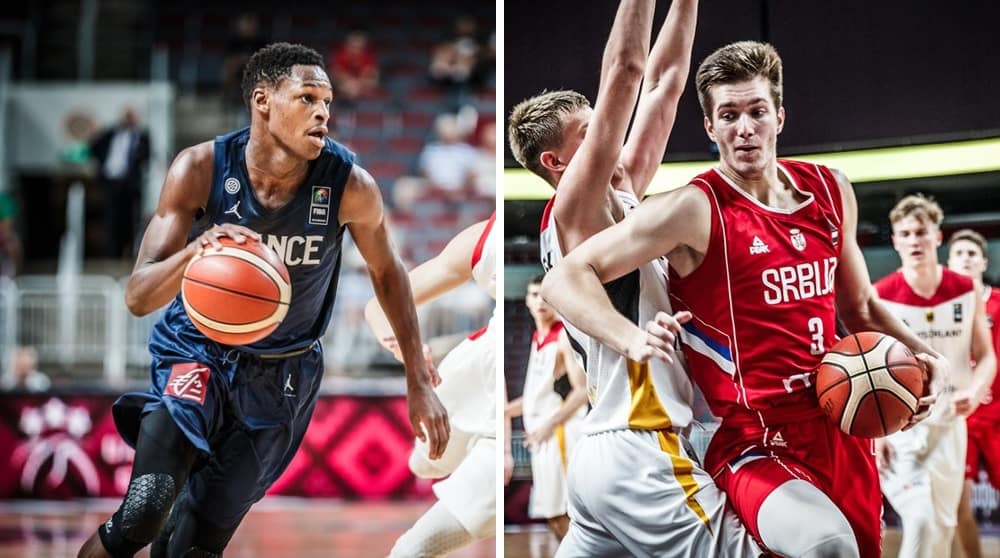 «Sorry but I have to go watch how these guys shoot». That’s part of the job too, of course. Tommy Lloyd, as affable as a person could be, says goodbye after a brief talk in the hall of the Arena Riga, between one game and the other of the last day of the FIBA U18 European Championship. The 3rd place game is about to start and the long-time Gonzaga Assistant Coach has to go take a look at the shooting mechanics of French and Russian players during the warm-up. Not before, however, to leave us with a wish for his Joël Ayayi: «He’s having a good tournament so far, hopefully today will have a strong finish and get a medal».

The combo guard from Bordeaux has been the main guy of an athletic and talented French team but had quite of a rough day in the semifinal against Serbia: only 6 points in 17 minutes in a game dominated since the beginning by his opponents. The Zags’ European “derby” with Filip Petrušev was quite disappointing, since the Serbian big man hadn’t his best day either (7 points, 9 rebounds, 6 assist but also 6 turnovers), although was more than enough talented to be useful for his team to some extent.

That day, Ayayi never found his way into the game. Yet, he seemed unflappable all the time, even while spending the whole 4th quarter on the bench. His body language, as much as his decision-making, tends to leave little doubt: there is always a sense of calm, control and confidence in the way he carries himself on the court. That day, it was difficult to watch him without going “this guy will definitely bounce back tomorrow”.

Then the tomorrow comes and nothing seems change, at first. At the half, things keep going in the wrong direction: Russia is up by 12 points and Ayayi is still scoreless from the field (0/5). However, it’s only a matter of time before he starts to turn things around. Much of Joël’s strength lies in his patience, in following the flow of the game and waiting for the right moment to rise above his opponents. In the middle of the third quarter, he starts to get hot and Russia simply can’t do anything to stop him: within about one minute, he goes with a nice, smooth floater (that’s kind of his trademark), then another one, then an off-the-dribble three-pointer from way beyond the arc. France is back in the game and Ayayi will end up being the main factor of the final win, with 22 points (8/20 FG, 5/6 FT) of which 20 scored in the second half.

Mehdy Mary, Assistant Coach of the French U18 team, paints us a picture with the essential features of Ayayi’s game and attitude: «He has great basketball IQ, he really understands the game and has a great ability to score in clutch time. He’s a true competitor. He quite needs the competition-factor to give the best of himself. When the stress level of the game goes up, he’s able to give the proper answer to that situation. He’s rather calm, crafty and sound. Sometimes he can make mistakes, but he never goes too low or too high.»

This season, Ayayi will finally have a taste of Division I basketball after a year of hard work in Spokane: «When we recruited Joël, we talked about all options, – Tommy Lloyd says – there was an option to play right away and an option to redshirt. We decided to see where his development was at. I think that in his heart he wanted to play, but when he got there and started training everyday, he saw that he got a long ways to go. Physically, he was one year younger than all the players, he was 17 when usually our players on the first year are 18 or 19, so he needed another year to get stronger. He was used to be one of the more athletic players on the court: when he came over here, he was maybe one of the least athletic. He needed a lot of progress with his body and maturity.»

With grad transfer Geno Crandall planning to enroll at Gonzaga in October, Ayayi is projected to be the fourth guard in the rotation, behind Josh Perkins, Zach Norvell and the former North Dakota point guard. He will likely not have many minutes but, as we already suggested, his clutchness shouldn’t be overlooked if he will ever have to be on the court in crucial moments of the game. 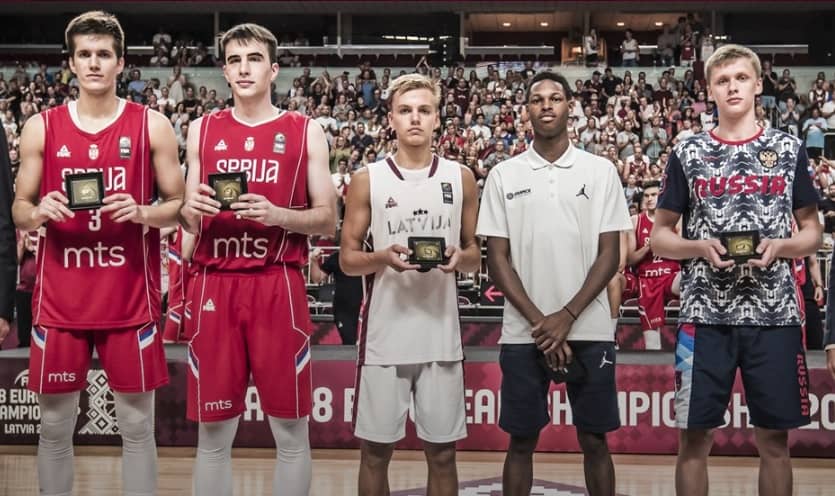 Speaking of ability to perform under pressure, Petrušev made a good impression as well on the final day of the U18 EC. He has been named in the All-Tournament team, just like Ayayi, after dominating the paint (29 points, 8 rebounds) together with Marko Pecarski (MVP of the tourney) in the title game won against the home team, in front of 11.000 Latvian fans. Not exactly the silent and boring environment that we’re used to see at a European youth summer tournament.

Third in the tournament both for points (21.0) and rebounds (8.7), his shot is definitely better than what one might think by judging him solely on his performances in Latvia (only one three-point attempt in 7 games). It surely is tricky to face him on defense when he receives the ball around the perimeter. Petrušev is all but lightning-fast, yet very mobile at 6-foot-11: he can go for the long-range jumper or put the ball on the floor, looking for a mid-range off-the-dribble shot or relying on his vision, timing and passing skills to serve a teammate.

In fact, there’s very little that he can’t do on the court: very high positioning skills around and in the paint, great footwork, increasingly evolving low post movements, soft touch around the basket, ability to instantly recognize and take advantage of favorable mismatches. A vast and yet still expanding repertoire, thanks also to the year at Montverde that has allowed him to add something to his solid European game, as Petrušev himself recently told to Spanish magazine Gigantes: “In the United States, [the style] is more physical, more athletic, it is different. It helps a lot to be able to mix the two. Now I realize that. […] Tall players do well at Gonzaga and this is one of the things for which I have chosen them. When I visited Gonzaga, I have seen what the coaching staff was doing with these players and the way they employ them. The style is quite similar to the European one, which will help me a lot too. I expect great things.”

«I think he had a lot of changes in his life, especially in the last couple of years, and he needed to adjust. – Serbian scout and coach Miloš Vujaković says – I always liked him a lot, he has always been a good team player, with pretty good basketball IQ, who played solid defense. However, he needed to change a little bit and I think he made that change: he improved his body and, more importantly, he became more aggressive on the court. I think that Gonzaga was the perfect choice for him and that he will adjust nicely there: I really like the way they play, they have a lot of space for smart big guys like Petrušev. We’ll see about his first year, I don’t know about the plans for him, but as soon as he gets into the system, I believe he will do pretty good things, at least something like Dušan Ristić with Arizona.»

While he doesn’t lack willingness and some skills on defense, he still seems behind in terms of verticality and strength, if compared to some of the players that he will have to face now at the D-I level. In other words, as a freshman he may and should face some hardship against more athletic opponents but he seems to have enough skills to prove himself right away. On the other hand, there’s plenty of time for working in the right direction and a good example to take a cue from – a certain Killian Tillie.

Regarding Gonzaga, everybody knows that this year’s team has all the right pieces to go very far: at the same time, there seems to be enough to be high on the future as well. Some players will graduate at the end of this year, others will likely leave ahead of time and be selected at the next NBA Draft, but with Ayayi, Petrušev and also Lithuanian wing Martynas Arlauskas, the European tradition of Gonzaga seems to be more than ever in good hands.