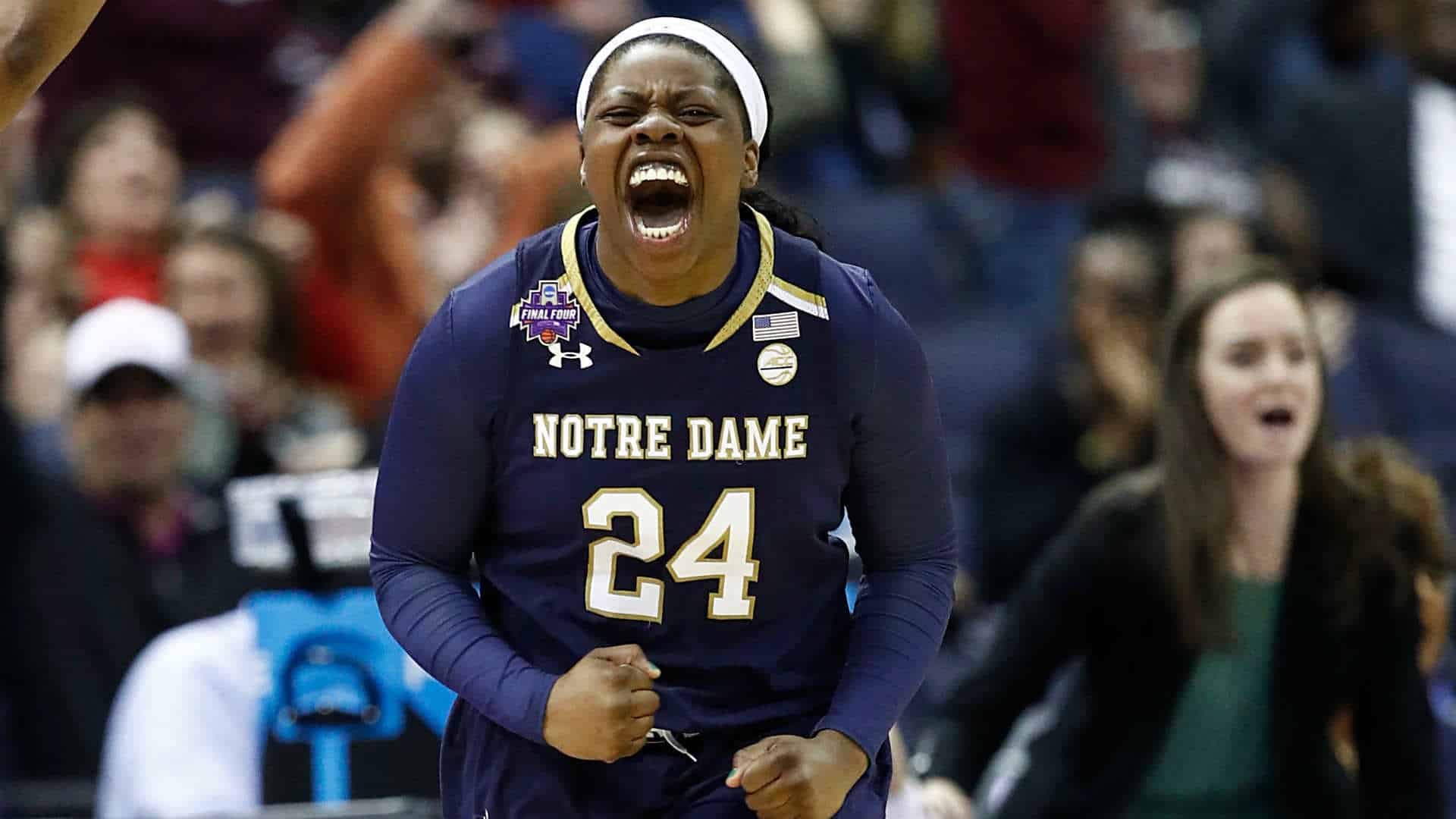 Uconn just lost a semifinal game in the Ncaa tournament on a buzzer beater, for the second consecutive time.

The player who took the game winner, Arike Ogunbowale, is walking down the alley to her team’s locker room when she receives the tweet. It’s not the kind of tweet she might receive on any other day. It’s her idol, Kobe Bryant, congratulating her for hitting that shot.

At first she can’t believe Kobe actually took to twitter to offer his praise.

But her disbilief is just what Kobe needed to give her a taste of MambaMentality:

With such a blessing the guard could not fail, and she will finish the job 48 hours later with another buzzer beater to give Notre Dame its second National Ncaa title.

It was by far the most incredible and thrilling Final Four in a while, and a very good argument against those claiming that the women March Madness tournament is boring and predictable, with Uconn cruising every year to a win and everybody else playing second fiddle.

Early signs seemed to suggest the 2018 Tournament was going to be special. Florida Gulf Coast upsetting Missouri could have been scripted in any other March Madness, but Tennessee losing to Oregon State was a real stunner. Before that game, the Lady Vols home record in tournament games was 57-0. No Tournament is ever complete without Cinderellas, in this case Buffalo and Central Michigan reaching the Sweet 16, and doing it in style: the Bulls had blowout wins against South Florida and Florida State, the Chippewas got past LSU and Ohio State, with the latter being the Final Four host. It was only the third time in Ncaa history that two #11 seeds or lower reach the third game.

The Final Four, however, featured the four #1 seeds, and both semifinals went to overtime. Mississippi State and Louisville faced each other in the first game. The Bulldogs were the favorites, but it was not easy to get a win against the Cardinals and reach the Final for the second consecutive time. After the huge three-pointer by Roshunda Johnson that sent the game to overtime, coach Vic Schaefer gathered his players and told them what they have been repeating to themselves for the whole season: “you are here for this, you were born for this”.

And they proved it by dominating in overtime, with Teaira McCowan playing the full 45 minutes and posting a historic double-double of 21 points and 25 rebounds (most rebounds in a F4 game). Asia Durr, ACC Player of the Year, was not enough for the Cardinals.

The tournament was supposed to be a moment of redemption for Uconn. Days before the first game Gabby Williams, the Huskies’ leader, did say that Uconn had something to prove, to everybody and to themselves. And they did show something early in the tournament: on March 17th UMBC made history by winning against Virginia while Uconn made history by destroying Saint Francis 140-52 and setting a bunch of records (including record-level accusations of “lack of pity” and “arrogance”).

After the win against the defending champion South Carolina in the Elite 8, the Huskies seemed ready to get over the loss to Mississippi State they suffered last year. But, their tournament finished once again on a buzzer beater in the overtime of the semifinal.

After the loss, coach Geno Auriemma said: “They thought they had us put away a couple of times, and we kept coming back and coming back and [in the end] we just ran out of time”. The Huskies did force overtime despite being down 5 points with 21 seconds left in regulation, but Arike Ogunbowale’s buzzer beater sent Notre Dame to the Final. It was the first loss of the season for Uconn, who reached the semifinal with 36 wins and 0 losses. Huskies and Fighting Irish had already played each other on December 3rd in the Jimmy V Classic. In that game, Uconn came back from an 11-point deficit to get the win. Coach Muffet McGraw deserves part of the credit. She found a way to make up for the losses of two key players in Brianna Turner and Mychal Johnson to injuries.

48 hours later, the game had more or less the same outcome, but with a different process. Notre Dame won the game coming back, after scoring 3 points in the whole second quarter. Mississippi State enjoyed a 15 point lead in the second half and seemed ready to celebrate its first title. Coach McGraw made a few adjustments on the fly and the Fighting Irish came back to tie the game. Arike Ogunbowale was not playing a particuarly impressive game. 5 for 20 from the field in her first 39 minutes and 57 seconds were not getting it done. Mississippi State’s defense and McCowan (18 points, 17 rebounds) patrolling the paint frustrated her so much she even punched the padded area of the basketball stanchion a few seconds before the final timeout. 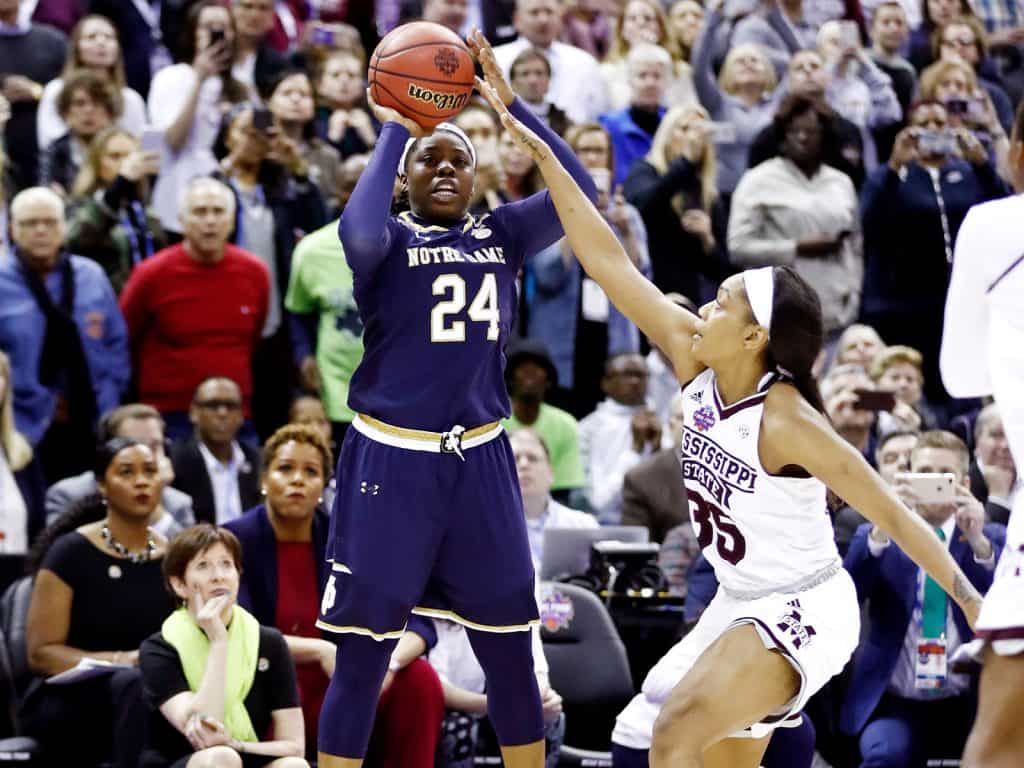 Coach McGraw drew an action for Jessica Shepard, the hottest hand for the Fighting Irish, who was 8 for 10 from the field and coud take advantage of McCowan being out of the game with five fouls. Except coach Schaefer had already planned to double team Shepard. Jackie Young didn’t hesitate when she saw Arike moving towards the ball. With her back to the basket and 3 seconds left in the game, Ogunbowale could do only one thing: she turned around, dribbled twice, jumped off one foot and released the shot. The ball took such a high arc it looked like it was never going to come down. But when it did, it splashed through the net.

17 years later, on Easter day once again and with coach McGraw still leading the team, Notre Dame won its second Ncaa title after losing to Texas A&M in the Final in 2011 and to Baylor in 2012 and two consecutive times to Uconn in 2014 and 2015.

Uconn’s dominance seemed inescapable, but the 2018 Tournament proved the opposite. But what now, you might ask? Well, the Fighting Irish will be part of the College Basketball Tour and will be in Italy next August.