BasketballNcaa rates the year of 2016 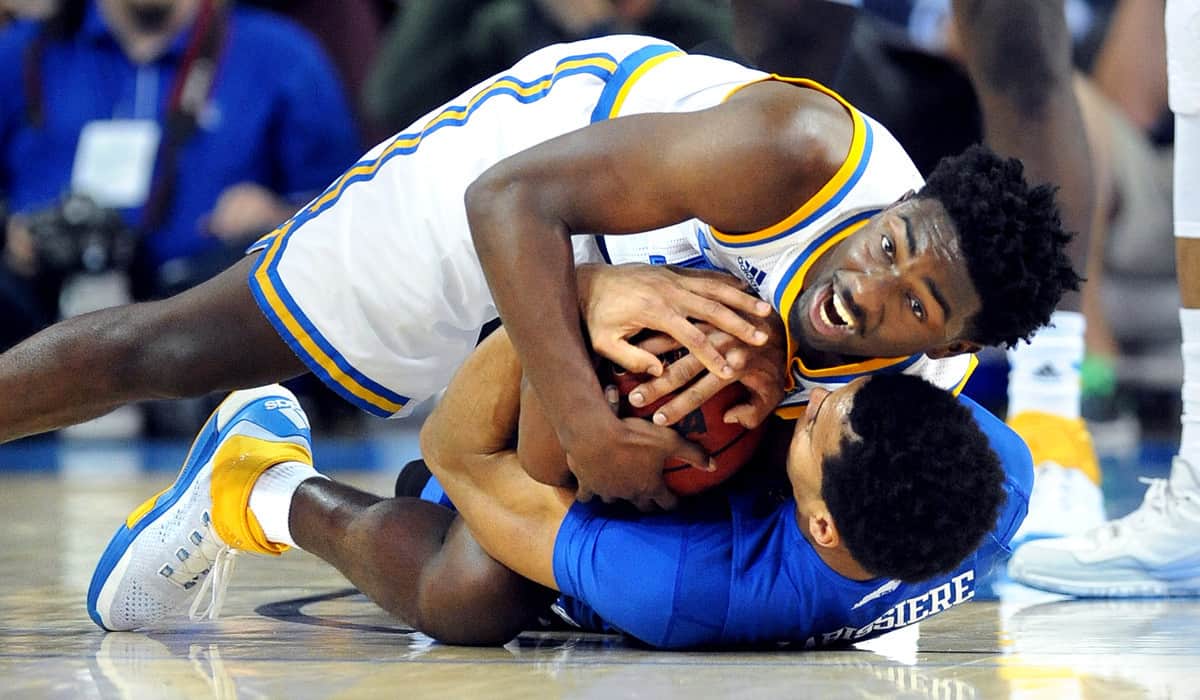 Last day of the year and Conference season has just begun. After two months of Ncaa play, it is time to draw a few overall evaluation of this new season. Every BN’s member answered 10 quick questions to sum up what happened.

What is your pick for best team?

Stefano “Bobby” Russillo: Villanova. It’s the most solid team, has the best system, Josh Hart is playing at POY-level and Mikal Bridges is one of the most improved players in the nation.
Fabio Cro: UCLA. Last year it was a disaster and coach Alford was on a hot seat, but the Bruins were the most impressive team, especially for the potential that is yet untapped.
Stefano “Mac” Bei: UCLA. Everybody knew they were going to be good, but nobody saw THIS coming.
Manuel Follis: by looking at both offense and defense, I’d go Virginia
Raffaele Fante: UCLA is not just the best team, it is also the most fun to watch.
Riccardo “Ric” De Angelis: Villanova. Not a perfect team, but they are as solid and efficient as it gets.
Paolo “Pablo” Mutarelli:  Kansas has the best backcourt in the nation and Josh Jackson seems to be a great fit in an offense that proved tough to adjust to for his predecessors. 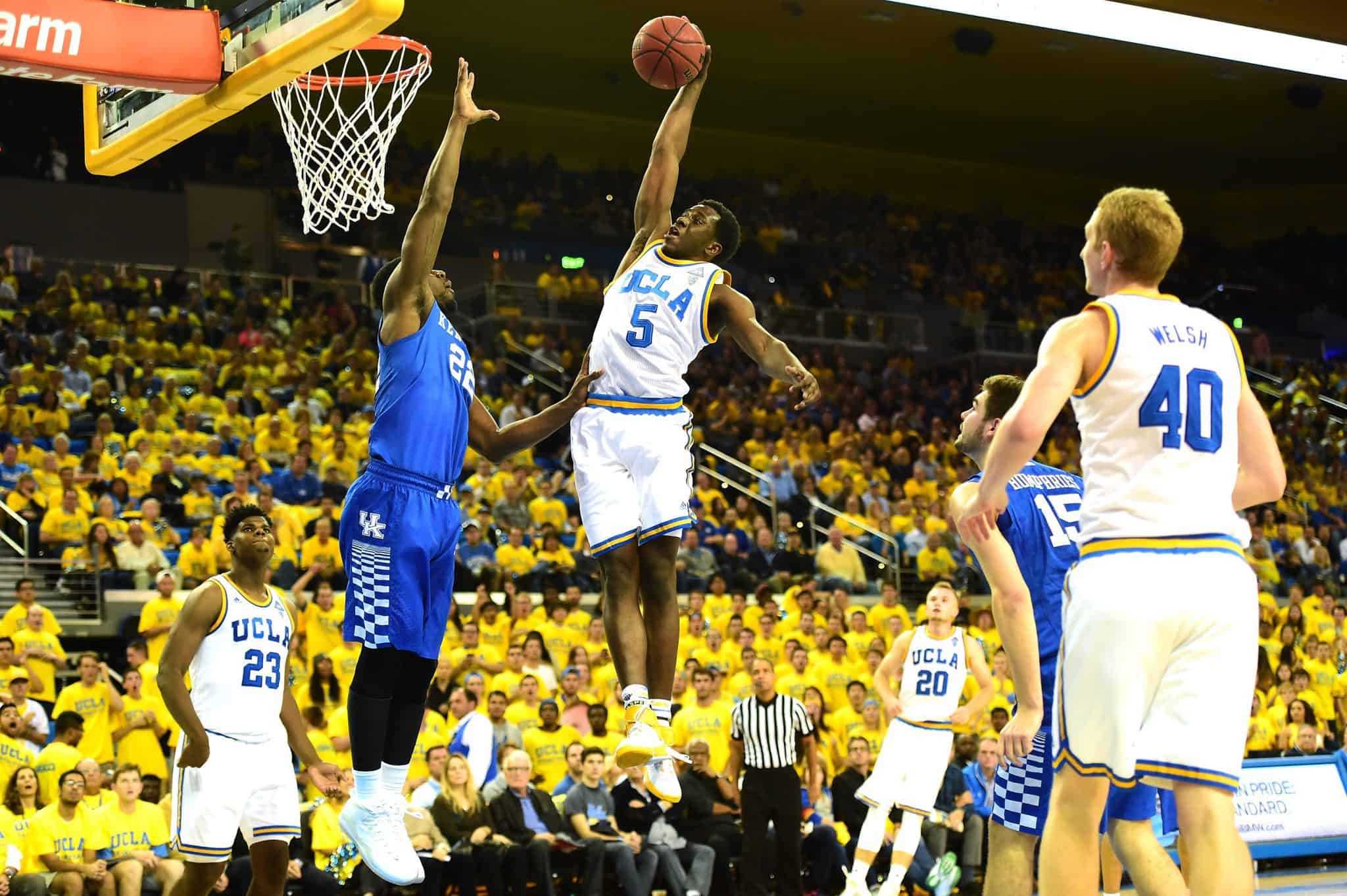 Which team did better than expected?

Stefano “Bobby” Russillo: on paper, Baylor is not worth a top 25 spot, but they are top 15 in both offensive and defensive efficiency thanks to a balanced system. And Jonathan Motley finally grew into the leader they needed.
Fabio Cro: Gonzaga. They are better than last year, despite the roster overhaul.
Stefano “Mac” Bei: Creighton is always snubbed because it’s part of the Missouri Valley, but the whole program is much better than the level of competition.
Manuel Follis: Baylor. Nobody saw it coming.
Raffaele Fante: Number of votes for Baylor in the AP preseason ranking: zero. Now it’s unbeaten at #4.
Riccardo “Ric” De Angelis:Baylor in the short list of unbeaten teams in December? I doubt anyone would have said that.
Paolo “Pablo” Mutarelli: Gonzaga lost 4 of it’s first 5 players for minutes played. It has a perfect record and is a top20 team in both offense and defense.

Which team did worse than expected?

Stefano “Bobby” Russillo: Uconn. Larrier, Gilbert and Diarra are injured, but that’s not enough of an excuse. They have a 5-7 record and are 232nd in offensive efficiency in the nation. That’s a huge disappointment for an AAC team that still has Adams, Purvis and Brimah at roster.
Fabio Cro: Duke. Just look at what their potential. Injuries are not an excuse.
Stefano “Mac” Bei: Michigan State. They were a top10 team in preseason, but they are inconsistent.
Manuel Follis: It would be easy to say Michigan State, but I don’t feel like betting against Izzo. I’ll go with Syracuse. Their nightmarish zone defense is a thing of the past.
Raffaele Fante: Syracuse, even worst than Michigan State, since the Orange have a healthy roster.
Riccardo “Ric” De Angelis: Syracuse. They are 8-5 and lost by 33 at home against St John’s.
Paolo “Pablo” Mutarelli: I’ve always loved Shaka Smart “Havoc defense”, but things didn’t work out at all for Texas.

Let’s make it harder. Name a team nobody is talking about but that could be a major surprise in the next month and should be worth watching?

Stefano “Bobby” Russillo: South Carolina. They are the third defense in the nation and still get snubbed at the AP poll. Also, fans should keep an eye on PJ Dozier. And Sindarius Thornwell is about to get back as well.
Fabio Cro: Florida State Seminoles! They play fast and fun and they have two players in Isaac and Bacon that are worth watching.
Stefano “Mac” Bei: South Dakota. Trey Burch Manning and Matt Mooney are two sophomores that might be doing well in the future.
Manuel Follis: Harvard is pulling it together. The team is incredibly young and talented, and Bryce Aiken is worth keeping an eye on.
Raffaele Fante: California is not as talented as it was last year, but Charlie Moore is the kind of scoring threat they needed at PG, and the duo of Moore and Rabb is hard to stop.
Riccardo “Ric” De Angelis: there’s a 7-5 Senegalese giant that has the moves of a 6-11 player and sports the most amazing goggles ever. Isn’t that enough to watch UCF?
Paolo “Pablo” Mutarelli: they say Jawun Evans is the second coming of Chris Paul. He is trying to get Oklahoma State back to the top of college basketball. And Brad Underwood is one of my favorite coaches. 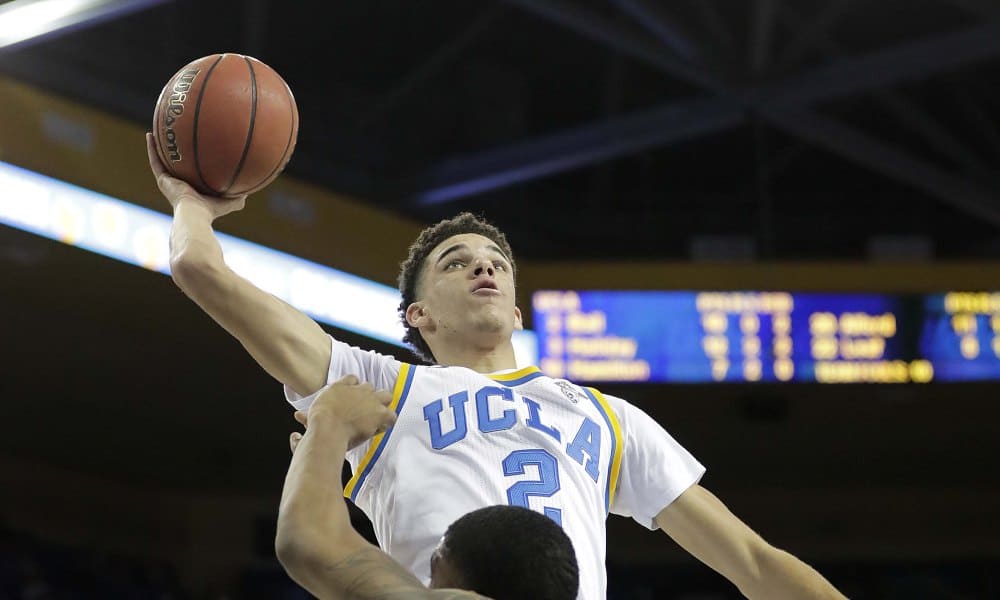 About the draft: which played would be your #1 pick, whichever team the pick is going to?

Stefano “Bobby” Russillo: Lonzo Ball. I would trust him to run an Nba team right now. He is a PG with the body of a wing and he silenced any concern on his outside shooting by averaging 42.7% from three. And he can play defense.
Fabio Cro: I’d go with UCLA’s TJ Leaf. Great talent and fundamentals.
Stefano “Mac” Bei: Lonzo Ball. He has been the superior player so far, a natural leader with great court vision. He has to improve in his shot mechanics.
Manuel Follis: So far, Lonzo Ball is the best player. Hands down.
Raffaele Fante: Jawun Evans. What he lacks in height, he has it in IQ and talent.
Riccardo “Ric” De Angelis: I’ll go with Lonzo Ball as well. His shooting mechanics might be an issue at the next level, but the rest is too much to pass on.
Paolo “Pablo” Mutarelli: Lonzo Ball, without question. As The Ringer’s Jonathan Tjarks said, “he’s a 19-year-old who has been given the keys to a high-powered sports car, and he’s allowed to drive it as fast as he wants”.

Which player disappointed the most so far?

Stefano “Bobby” Russillo: Troy Caupain. He was the preseason player of the year in the AAC, and now he scores 9.8 points and shoots 24% from behind the arc and 60% on free throws.
Fabio Cro: Grayson Allen is doing everything wrong. And he was supposed to be the star of the season.
Stefano “Mac” Bei: Grayson Allen. His averages went down and he was under bigger pressure. And he is now suspended from the team.
Manuel Follis: Sacha Killeya-Jones. Who, you ask? That’s the point. He was supposed to play for Kentucky, but whenever coach Calipari put him on the floor things went awfully wrong.
Raffaele Fante:any conversation on Grayson Allen should and would include a number of profanities.
Riccardo “Ric” De Angelis: Grayson Allen. The fact that such a talent is torpedoing his own career is bewildering.
Paolo “Pablo” Mutarelli: Isaiah Briscoe is perplexing to me. He can attack the paint but he can’t shoot it from outside, he makes plenty of mistakes with the ball in his hands and he is an ok defender. I was expecting a lot more from him in his second year. 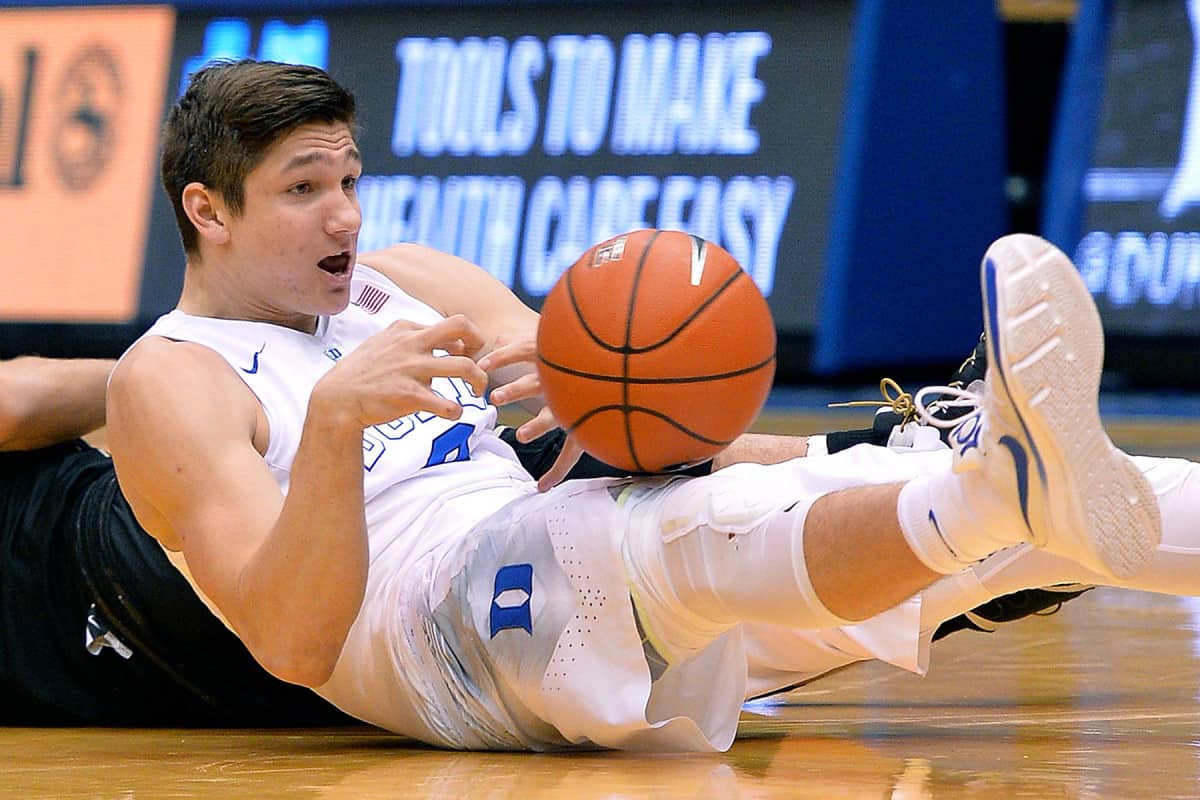 Name a player that could shine in the next months.

Stefano “Bobby” Russillo: Payton Pritchard, Oregon’s freshman. He is the kind of guard who doesn’t shy away from responsibilities (see the UCLA game for reference) and has the court vision and athleticism to make the jump. He already stole the starting spot to Casey Benson.
Fabio Cro: Aaron Holiday (UCLA) is growing, he is always ready when it matters.
Stefano “Mac” Bei: Justin Patton (Creighton). He will be a factor in the Big East and people are starting to take notice.
Manuel Follis: the Izzo therapy is working with Josh Langford. He will have at least one 20-point performance by the end of the season.
Raffaele Fante: Deng Adel (Louisville) and OG Anunoby (Indiana). Both sophomores and both could be stars soon.
Riccardo “Ric” De Angelis: Glynn Watson (Nebraska). He is an intriguing offensive talent, but he needs to be more consistent.
Paolo “Pablo” Mutarelli: Mustapha Heron (Auburn) is a scorer with good size and good shooting touch. He knows how to use his size to earn free-throws and is an above average three-point shooter. He is ready to make the final jump. 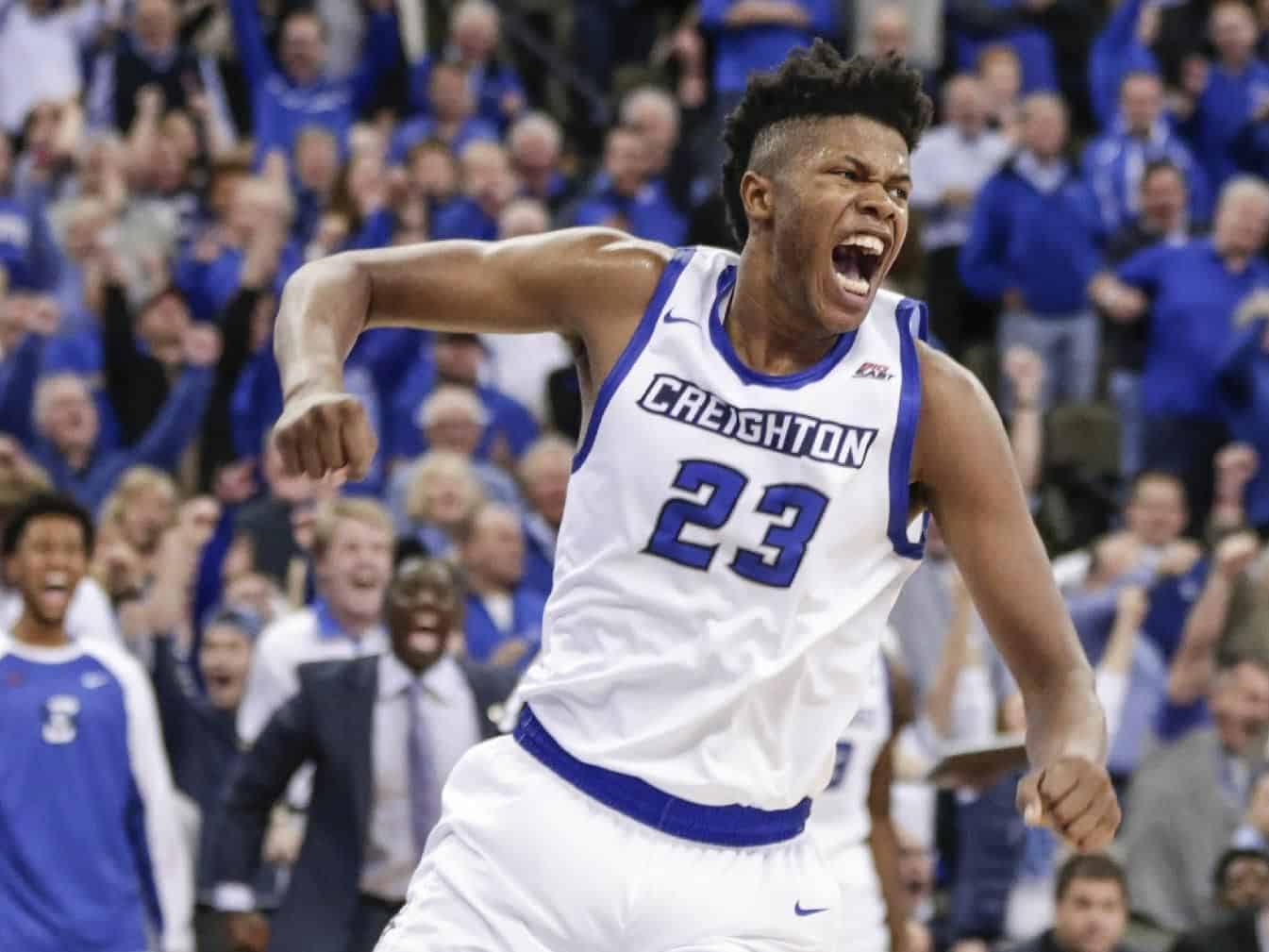 Stefano “Bobby” Russillo: Malcolm Hill is Illinois’ go-to guy. He is averaging 18.6 points, 6.4 rebounds and 2.1 assists while shooting 42.3% from behind the arc. Whoever gets him in the second round next June might find a diamond in the rough.
Fabio Cro: Dwayne Bacon (Florida State). Few wings are that strong and can score with such ease in the Ncaa.
Stefano “Mac” Bei: Bogdan Bliznyuk (Eastern Washington). He took over for the team and more than replaced Tyler Harvey and Venky Jois. He has a great future ahead of him.
Manuel Follis: Dewayne Russell (Grand Canyon). Coach Dan Majerle recruited him hard and then turned him into a scoring machine. The talent is there, the height will give him trouble in the future.
Raffaele Fante: All eyes are on Dennis Smith, but NC State will go places because of Torin Dorn.
Riccardo “Ric” De Angelis: if you make a google search for “Matt Ferrell”, you will only find pictures of his reunion with his brother. Yet, he is one of the most improved players in D-I.
Paolo “Pablo” Mutarelli: Sviatoslav Mykhailiuk is one of the best all around player in the nation and one of the most underrated. An excellent on ball defender, quick with his hands and feet and the hidden playmaker within Kansas offense. He will be a steal in the next draft. 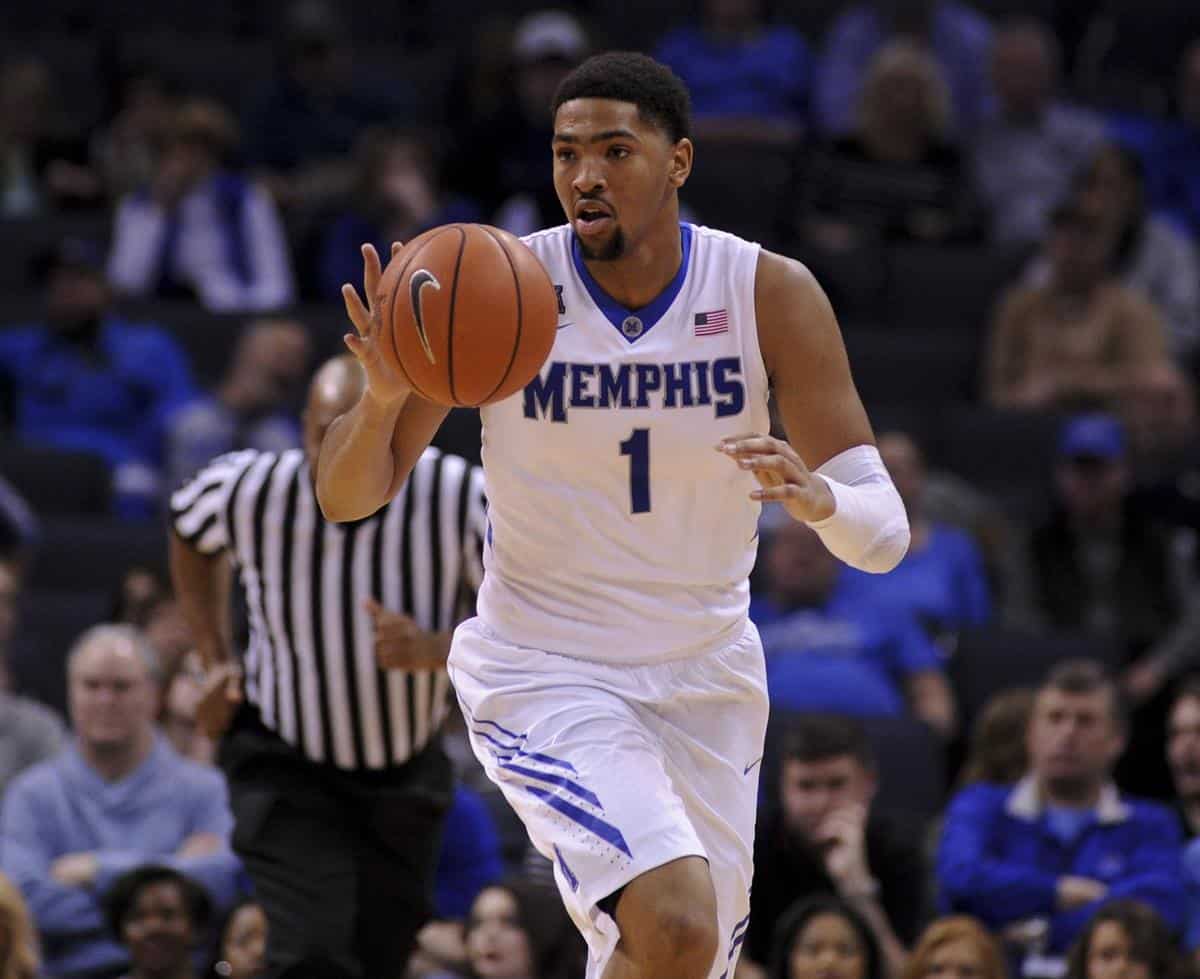 Stefano “Bobby” Russillo: Michel Young (Pittsburgh). He is undersized at PF for the Nba, but he can play in the paint, shoot from behind the arc (45.7%) and has good court vision (3 assists per game). His 22.8 points are carrying the Panthers.
Fabio Cro: Zach Collins (Gonzaga). Someone might think he should not be listed as underrated, but he deserves more consideration.
Stefano “Mac” Bei:  Again, Justin Patton (Creighton), who will certainly get more attention with the start of the Big East. He lacks a few pounds to really fight under the basket, but the potential is there.
Manuel Follis: Dedric Lawson (Memphis). He has the athleticism, the touch and fundamentals. He never looks tough, but nobody has him in any draft conversation and that’s a mistake.
Raffaele Fante: Bonzie Colson (Notre Dame) is underrated and undersized but he is one of the best in college with his 17 points and 10.4 rebounds per game.
Riccardo “Ric” De Angelis: Caleb Swanigan. ‘Nuff Said.
Paolo “Pablo” Mutarelli: Hayden Dalton. He is not too tall nor too athletic, but he has great IQ and good hands. He was the real protagonist of the game between Wyoming and USC. He somewhat reminds of another Ncaa player of the recent past, Jacob Parker, 6-6 center for the Stephen F. Austin that took the Marc Madness by storm.

Last question, the one player or moment that struck you the most.

Stefano “Bobby” Russillo: Fort Wayne’s head coach Jon Coffman and his post game interview after the upset against Indiana. Him thanking the opposing coach for deciding to play the game on the road is a great example of the spirit of college basketball.
Fabio Cro: have you seen Florida’s Canyon Barry shooting free-throws? I mean, at least Onuaku was a center…
Manuel Follis: I go with Fort Wayne’s head coach post game interview as well. You can watch the video here. This is why I love college basketball.
Raffaele Fante: Well, we all know Duke is the only favorite and nobody is ever going to challenge its dominance. Or not.
Riccardo “Ric” De Angelis: Indiana State pulling the upset on Larry Bird’s birthday.
Paolo “Pablo” Mutarelli: the Ball’s dynasty. We did talk about Lonzo, but his brothers LaMelo and LiAngelo are coming, and they seem just as talented. 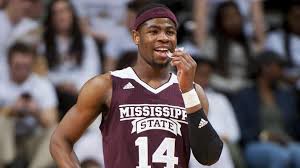